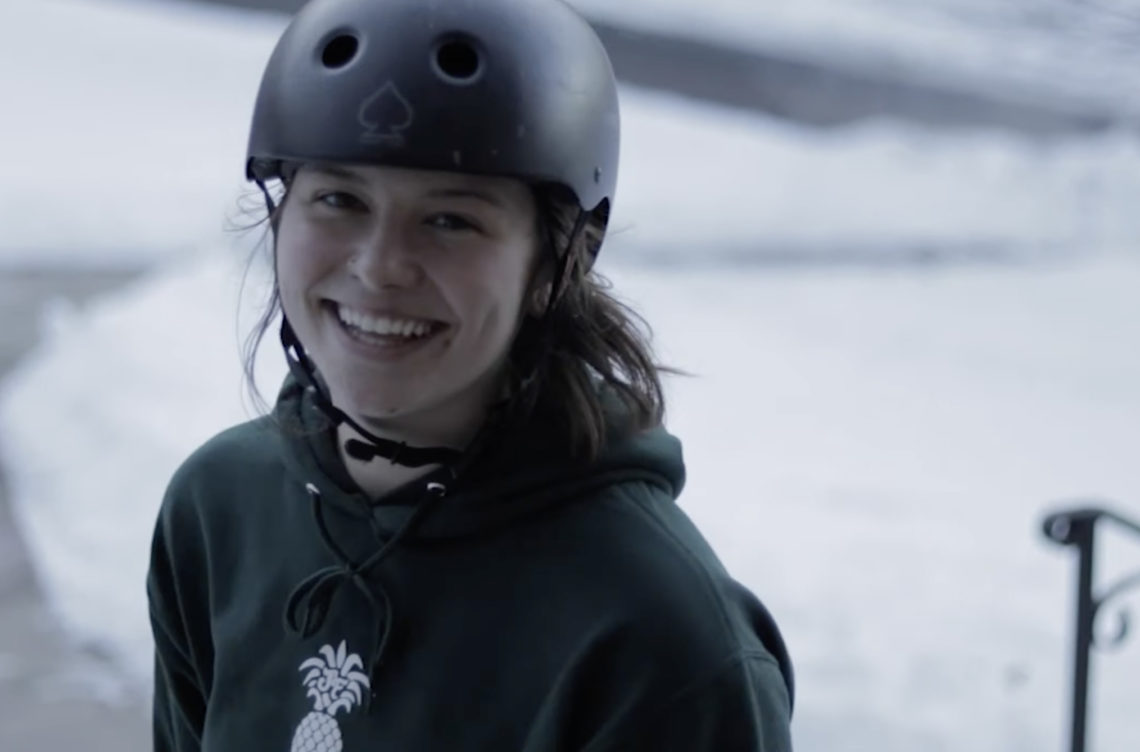 Abby Ronca has been on the come up in the Mid-Atlantic for the past few years. She is still in high school, but has been building out her riding resume at events like Ms. Superpark at Big Boulder in 2019, IT’S TITS! last spring, and Slush Magazine’s Game of Big SNOW this past summer. I first met her at Ms, where her friendly demeanor and understated style were readily apparent–in short, Abby makes an impression the first time you meet her, not only with her bag of tricks but with the amount of fun she clearly has when she’s riding. Abby has a natural ability on rails that comes from having the parks of Bear Creek and Big Boulder as her training grounds, along with a litany of Mid-Atlantic rippers to spin laps with. Just recently, Abby came out with her first street clips in Zoop Vol. 1, a glimpse at what the East Coaster is building on each winter. Last season, she joined the Roxy team, too, so things are ramping up for Abby. We checked in with her before the season started in PA because she’s definitely one to watch this winter. – Mary T. Walsh

Why do you mountain bike in the off season?
My parents own a bike shop and in the summertime I grew up riding and racing bikes with them. I’ve always loved mountain biking.

What makes Big Boulder so special?
The people are what made it so special.

Favorite place on the East Coast to ride, in addition to Boulder?
Bear Creek in Pennsylvania.

How about the dome? Do you like riding indoors?
Big Snow is definitely sick, it’s nice to have somewhere to ride year round.

What is the Zoop Crew? tell us a bit about the project and what you filmed for it.
Zoop Crew is a group of friends who all ride together. I was fortunate to ride and film with them this year. It was my first year filming street and I got to learn a lot from them. They’re putting together a movie and I’m hyped to have a part in it.

Just started riding for Roxy. How is that going? Anything exciting coming up?
Yes! It it is going great. I love it. They have been treating me so well. They really ask for rider feedback on their product. Working with Jenna Kuklinski and Nirvana Ortanez, I think Roxy is heading in a great direction. With their support, I’m hoping to film more this upcoming season.

Go-to trick rolling up to the rails now that the season is starting?
Boardslide, lol.

What pros from the East Coast do you look up to?
Liam Doyle, Alex Caccamo, Lauren Tamposi, Wes Heffernan, Mark Gama, and Johnny O’Connor.

Where do you fall in the pork roll or Taylor Ham debate?
I’m from PA so I don’t really have a side on it, lol. But my friend, Tara, says Taylor Ham, so I say Taylor Ham.