The Product Collection 2018: Our Essential Guide to Buying the Best Snowboard Boots

Happy feet are important for a full day of riding, make sure to get the most out of your season with a great pair of boots this year.

With so many great options available, finding the best snowboard boots may sound like a tedious task. These days, snowboard boots have all sorts of knobs, laces, buckles, and pulls, each new technology only muddying up an already confusing array of boot options. Then there’s the stiffness factor that needs to be taken into consideration. Some riders want their boots to fit like ice skates, others prefer a sneaker-like feel. Needless to say, we have come a long way since the days of wearing Sorels to the mountain.

If you’re in the market for new boots this season, read on below to discover the difference between Speed Zone™, Boa®, hybrid, and snowboarding boots with traditional lacing, so you can make sure to find the best snowboard boots for you. We’ve selected some of this season’s premier offerings, so no matter your preference or riding style, we have you covered. After all, nothing can put an end to a great day on hill faster than sore feet, and no one wants to be the one to call it when the dogs start to bark.

In general, you want your snowboard boots a bit tighter than your kicks. If your heel can lift out of the heel cup while walking around in them, they’re not tight enough. Then again, if your toes can’t wiggle, they’re too tight. Feet and ankles should feel snug and in place so that when you initiate a switch from edge to edge on your board, the board responds accordingly. Your big toe should just barely graze the toe cap.

Some boots are on the stiff side, while others are more soft and flexible. Beginners or park riders typically opt for softer boots, while more advanced riders or those who ride the backcountry more will want to consider a stiffer boot to have more precision control. If you’re an all mountain rider, go for something in the middle.

Get to know your lacing system

Now that you have an understanding of what kind of fit and flex to go for, we can get into the different lacing systems, and offer a few snowboard boot suggestions in each of the lacing categories.

Most times, when you get to the mountain, you don’t want to waste time lacing up your boots or waiting for your friends to lace up theirs. You just want to run to the lift. If this sounds like you, you’re going to love Boa technology. Since 2001, snowboarders have been able to slip their feet into their snowboard boots, crank the dial, and get after it. Some boots utilize one cable to tighten each boot, while others have two to three boa system cables for more precise, zonal tightening. Boa bonus: You don’t have to take off your mittens or gloves in the dead of winter to tighten or get your boots on and off. Taro Tamai is recognized for wanting to put the surf in snowboarding. He takes this type of riding inspiration and designs his board shapes and snowboard boots accordingly. With smooth flexing, and a rugged double BOA® construction, the K2 Taro Tamai is the one to go with if powder surfing or flowy snowboarding is your thing. 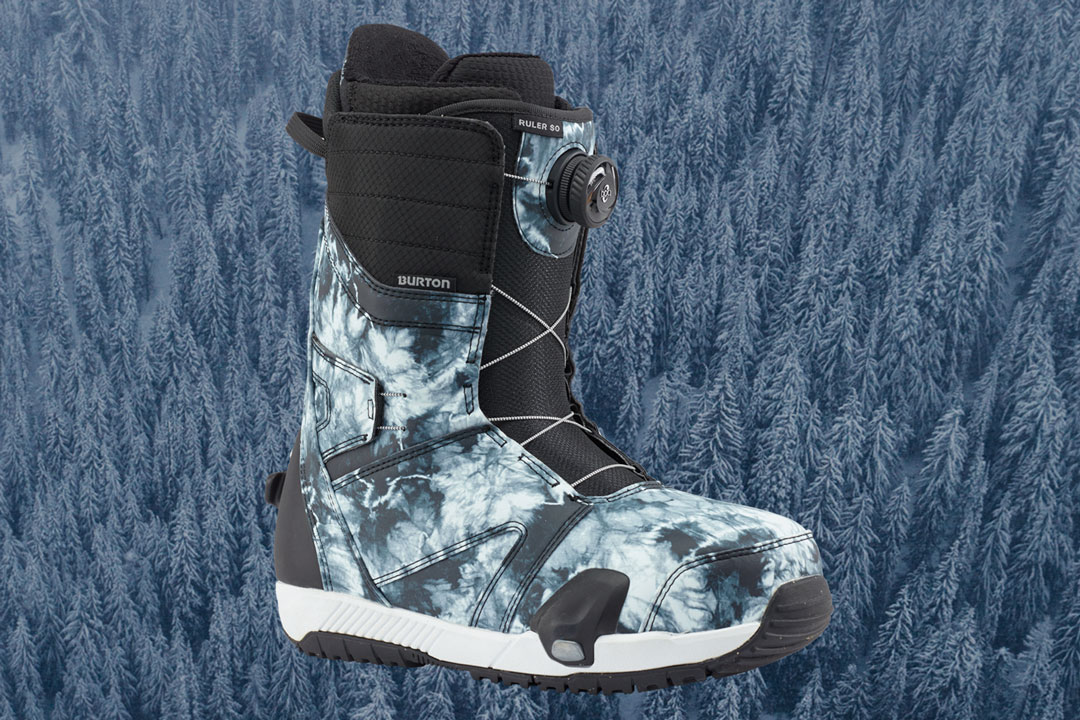 The Burton Step-Ons are the next level in strapless bindings. They not only take advantage of Boa® lacing, but you’re strapped in as soon as you step in. In fact, you don’t even strap in, you just simply step on and you’re good to go. We know what you’re thinking, and the answer is yes, the system does work a lot like a ski binding and boot system. But by utilizing a three-point lock-in design, compared to the traditional two-point, Burton has radically improved board response and feel. Furthermore, the new Step-Ons come in two different boot options, so riders who prefer both soft and stiff boots are in luck. You do need to commit to the bindings that they step into, but if the strapless approach is the approach for you, you’re going to be a helluva lot happier once you start beating your skier friends off the lift. DC prides itself on developing products that take into account the feedback of its team. Well, the team did a great job with the Judge Boot, and it’s a top choice among the DC Team Riders. Its Dual Boa Closure System ensures a precision fit so you won’t break an ankle, and the Aerotech Ventilation System will make sure your feet can breathe through all that sweat as you hike up to the bowl. Right in the middle on the flex scale, the Women’s Vans Aura Snowboarding boots has Vans custom focus Boa to target different zones. In fact, Vans was the first to start the trend and use Boa technology in their snowboard boots. Add that to a response liner and internal web harness, and you’ll have all the comfort and support you need as you adventure around the mountain for hours on end. If Bode Merrill can throw a double Miller flip in them, you know the Salmon Hi Fi snowboard boots are the real deal. Salomon’s Sensifit cables tighten throughout, and then come together at the top, so you only need to pull up once. Not only is the Nitro Venture Pro easy to take on and off via the TLS 5 Twin Lacing System, but they also have an Ortholite® Dual Density Footbed to provide snowboard-ready feet with the support and comfort they deserve. Combo that in with the Cloud 6 Liner, and you’ll be prepared for day to night shred sessions. Backed by none other than Danny Davis, the Burton ION Leather Red Wings© utilize the Speed Zone ™ Lacing System powered by Burton Exclusive New England Ropes, which means they’re extra quick and strong. But as we all know, with shredding hard comes stinky feet. To cure this problem, they come with a molded EVA footbed with Aegis™ antimicrobial coating. Top these boots off with genuine Red Wing® leather and you got yourself a solid snowboarding boot. The Women’s Celsius Coin O.Zone SL are another great option. They’ll match anything, are easy to take on and off, and super comfortable. When you use the quick pull system to take them on or off after a long day on the mountain, the non-removable liner is also a nice feature because you won’t have to worry about your liner coming out of your boot.

There are also riders that swear snowboard boots with traditional laces are still best, even if it might take a little longer to take them on and off, because you can tighten more specific areas than general regions. Another benefit of boots that have traditional lace is that if the laces break, you can simply buy a new pair of laces. If a Boa or quick-pull lacing system breaks, you might need to take your boots into a local shop. The adidas Samba might have started out as a soccer shoe back in 1950, but almost 70 years later, the style remains iconic. They have a medium soft flex, so they can be worn all around the mountain, and the grippy Continental™ Rubber outsole will help you keep your feet grounded as you hike up and down snowy and icy mountains. Additionally, the inner ankle harness and speed lacing system will keep your feet from sliding around, so you can pop off lips with total control. Ready for boosting in the park or slashing in the backcountry, the Thirtytwo TM-Three Grenier is the newest all-mountain performer and offers total comfort. Lace them how you please to offer security in all the right places, and take advantage of a personalized fit by customizing the heat moldable cushion liners with your exact foot-shape. The Vans Hi-Standard aren’t new to the snowboard boot industry. They’ve been around for 15 years, and for good reason. They’re reliable, have a quick traditional lacing system that’s tried and true, and they offer that classic Vans styling that can’t be beat. New this year, Vans teamed up with HOWL Supply, founded by Darrell Mathes and Nima Jalali, to introduce a stylish black and sulphur color that Vans and HOWL fans alike can both high five about (stay tuned for that soon). Burton has always been very performance-driven, and the Women’s Burton Coco snowboard boots are just that. Made for the groomer-loving girl that isn’t all about the frills, these boots feature a traditional lacing system to ensure the customized fit you’re after, a Level 1 Molded EVA Footbed to provide feet with some plush, and a softer response to allow for a bit of flexibility.

Similar to the popular ‘90s toy, the Bop It, some snowboard boots have a combination of technological advancements that you pull, twist, push (and bob it) to get that perfect fit. Below are some of the hybrid boots that’ll allow you to take advantage of all the best technology in one boot. The RIDE Fuse snowboarding boots take advantage of a traditional lacing system to tighten the outer shell of the boot, while the Tongue Tied™ Boa® Closure System actually lifts your heel if you need a more compact fit. Ultimately what this does is give your feet more support and prevent your heel from sliding around. Not to mention the Fuse also features RIDE’s Slime Tongue™ tech. Built from Urethane, the Slime Tongue™ reduces chatter and further locks your heel in place for increased board feel. Your heels aren’t going anywhere, trust us. Definitely a hybrid snowboard boot if we’ve ever seen one, the Flow Tracer uses the Boa cables for tightness along the upper part of the boot as the first tech system in place. As for the second, there’s a quick pull lace on the side of the boot, known as Flow’s Heel Lock system, to ensure that your heel stays in place with its extra cables that lock around the ankle area. 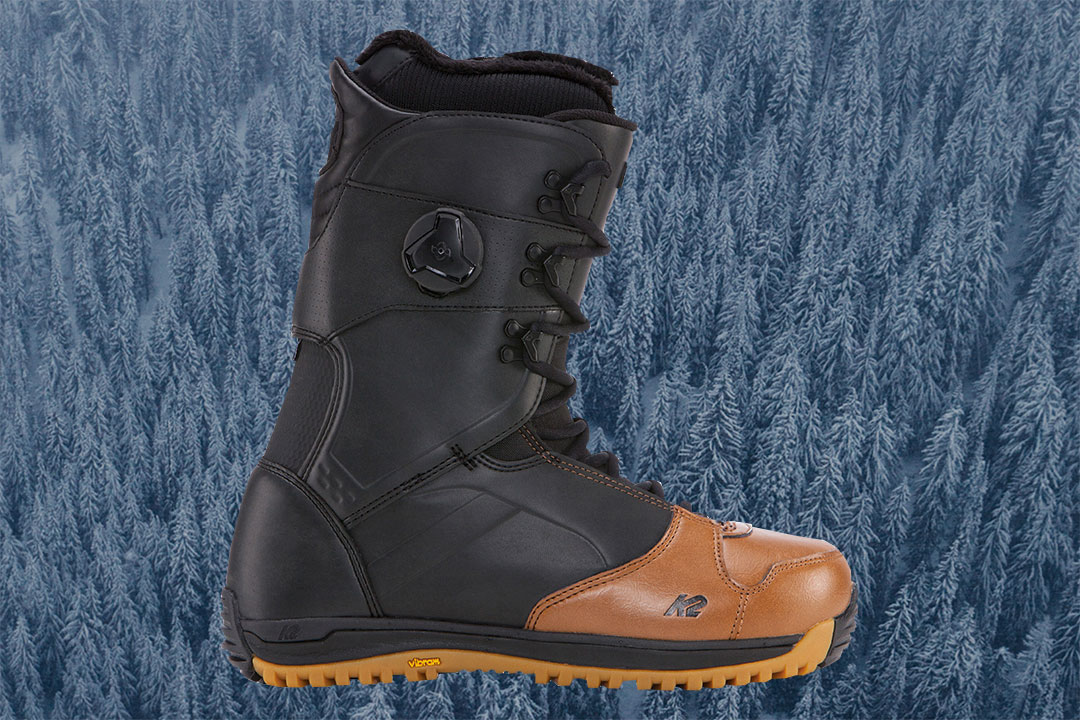 Aside from their sleek profile and fleece liner, the K2 Ender snowboarding boots use the Boa® Conda™ for tightened heel hold and a traditional lacing system for extra snug tightness in the places you need it most — allowing for responsive shifts from heel to toe edge as you cut through powdery trees or open fields. The Women’s Thirtytwo Jones MTB snowboarding boots will keep feet warm and totally supported. They feature traditional lacing and BOA technology. The BOA system is for the first ever “Walk Mode” for split boarding. For even more comfort, the Full Zip Gaiter locks in warmth and keeps moisture out. Your feet are going to love their company on your next splitboard expedition in the backcountry.

See also: Product Collection 2018: Eco-Friendly Snowboard Gear for the Tree Hugger in You